It was 8:21 AM on June 13, 2020. I was alone in my living room, on one knee, wearing a sportscoat over pajamas and pointing a glue stick* at the leg of a chair. I kept motionless for ten seconds, until I heard my phone, propped up on books on the dining room table, snap a photo. The moment was captured for posterity: 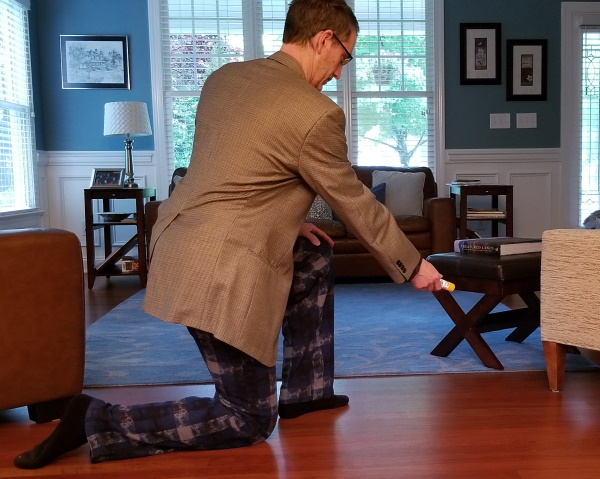 (These were lockdown days; note bad self-haircut.) My pose might look slightly familiar to any of you who follow my comics postings online. I shared this cartoon last week, on Groundhog Day:

I think posture is very important in communicating emotion, and I like to draw people semi-realistically. But I’m not a good enough artist to draw every posture from memory. So when I get stuck, I resort to staging a photo of myself in whatever position I need for the cartoon. In another example, here I am, again in my pajamas (I often draw on Saturday mornings), teeth clenched, angrily confronting an unseen foe and menacingly brandishing a toilet brush:

This was input into the following cartoon about my hatred of appliances ^&^*&!! beeping at me: 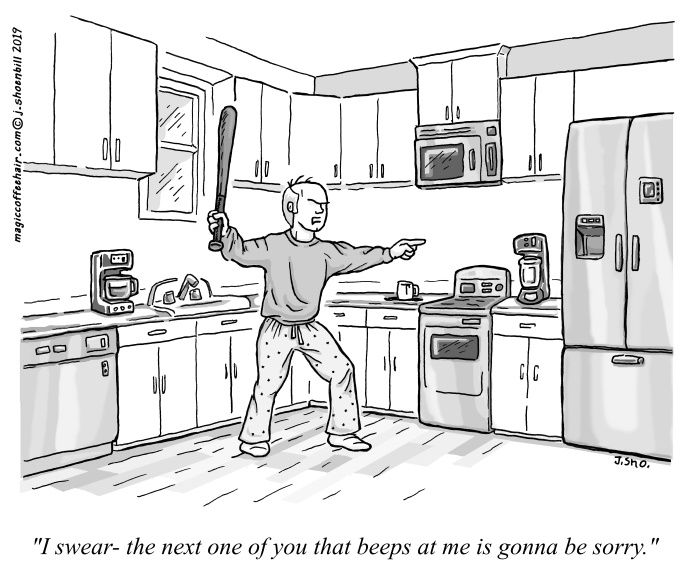 When I do these things, I am fully aware of the ridiculousness of each situation. But really, drawing cartoons is a ridiculous activity in itself, and these bizarre performances are just one small part of it.

Any pursuit beyond a day job and the requirements of everyday life, with no promise of success or reward, is a bit crazy. I suspect I am preaching to the choir here- I think those of you reading this newsletter are more likely than the general public to understand what I mean. You’re the cartoonists, guitarists, volunteers, activists, crafters, singers, DJs, job-switchers, and “Over-40 division” athletes.

I do enough of all that. But I also, pajama-clad, intimidate unseen foes with a toilet brush, which is crazy. Pretending to interview a groundhog in your living room using a glue stick is not normal. Spending an entire Saturday writing this newsletter, when there are so many other things I should be doing, is nuts.

These activities are part of an alternate path through life, and following that path has a price. You’ll miss things. Things like sleep. Think of your top ten favorite TV shows of the last 15 years. I haven’t seen any of them. An embarrassing admission is that I, a wannabe writer, don’t read fiction, either. I’ve been working my way through Harry Potter and the Sorcerer’s Stone since September 2019. They’re almost to Hogwart’s.

I’ve been in gatherings of neighborhood dads in which the conversation focused on grilling techniques, boats, hunting, lawn care, and their kids’ athletics. Meanwhile I’m thinking that I haven’t operated a grill in fifteen years and I spent that entire morning trying to figure out how to draw a bear in an airplane seat. “Smile and nod”, I tell myself… “just smile and nod”.

Truth be told, I am not that interested in grilling or lawn care anyway… unless perhaps your lawn care story involves capturing some strange animal, that you need identified. Then I will be quick to jump in with my enthusiastically expressed opinions. True story; I killed a dad-conversation this way once.

But I am convinced that the “dumb” path- the path that is pointless or ridiculous by everyday measures- leads to the most interesting places.  In my case, following my dumb dreams has allowed me to become one of only one to two hundred or so people in the U.S regularly publishing gag cartoons in print. I’ve cheered a few people up. some of whom have thanked me in writing, which is incredible. As a welcome side effect, I’ve been able to stay sane through consistently insane times.

Well, “sane” might be an exaggeration. I couldn’t find the source photo for the cartoon below, but it had me sitting at my kitchen island early one morning by myself with an empty wine glass, pretending I was in a cocktail lounge at closing time, pondering the counsel of an alarmingly large, nonspecific rodent**: 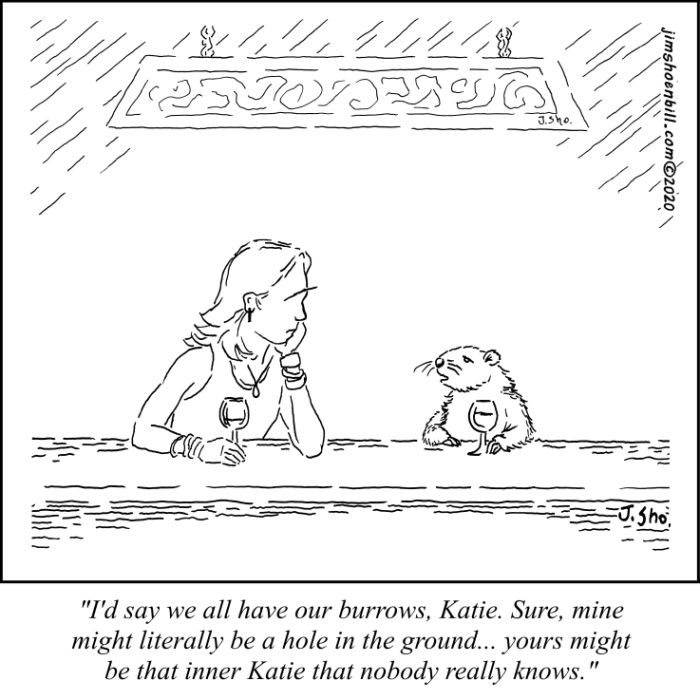 In my last newsletter I said something about new projects. Each year, I define a single big creative goal:

I’ve met each of these. For 2021, my goal is to finish two stories. I’ve done some writing before, but my past attempts were always semi-serious and I strived to follow accepted structures and techniques. This time, I’m saying “forget all that”.  These manuscripts will be full-bore, completely ridiculous satires with none of the constraints of “3-act structure”, “character development”, a “cohesive plot” or a “recognizable genre”.

The first will be a middle-grade story with a group of kids solving some sort of mystery. Think of a group of kids and their chauffeur a la Scooby Doo (sans talking dogs or Harlem Globetrotters) mashed up with Monty Python and Airplane! style humor. Much of the material will come from  my years of reading Hardy Boys stories to my kids, and adding ridiculous recurring characters, running gags and subplots.

The second will be based on my “Cinderella with Lizards” cartoon, which I posted a few months ago while asking non-seriously if I should turn it into a book. I expected no response, but the opposite happened; lots of you weirdos encouraged me to do it. Well, you asked for it so now you share in the blame. I have a good start on this Zoological Fairy Tale Romance(a new genre!) and have submitted the first 500 words to the Society of Children’s Writers and Illustrators Winter Conference manuscript gallery, where editor and agent types might theoretically see it. The current logline is:

“A lonely Carolina anole (Anolis carolinensis) escapes her bullying stepsisters (flap-necked chameleons, Chamaeleo dilepis) and with the help of her Fairy Zoologist and her best friend, a ukulele-playing bombardier beetle, turns anthropomorphic faux-mediaeval society on its head, ultimately finding her own Prince Respectful (a regal horned lizard, Phrynosoma solare) and living happily ever after in a relationship based on mutual friendship and support.”

Bonus points if anyone can identify the other cartoon of mine that inspired the beetle.

Both of these ideas are clearly Dumb with a capital D. But I sometimes reflect on how many accepted elements of entertainment and folklore are incredibly dumb, if we take a step back. Sleighs powered by flying reindeer are dumb.  A girl who mistakes a wolf in drag for her grandmother is ridiculous. A deaf, mute, and blind boy who becomes a champion, er, pinball player is… pretty dumb. A musical about Spam is beyond dumb.

Of course all of these ideas were wildly successful. So who’s to say that the world doesn’t need a few new dumb ideas?  Created by people following their dumb dreams?

Ideas so dumb, and bad, that no one would ever think they could possibly be useful.”

“Dreams, if they’re any good, are always a little bit crazy.”

* This was surplus from one elementary school year in which we had to provide ten glue sticks (per kid) for the first day. No child can go can use (and/or eat) this much glue in a year. I think this was part of a clever scheme to bridge gaps in school budgets and teacher pay through inflated school supply lists. One year my son’s list included ten notebooks, twelve bokes of Kleenex, $100 in massage gift certificates and Chardonnay.

** “The Alarmingly Large Nonspecific Rodents” would be an excellent name for a band.

P.S.> Help!!  I used to reach a lot of people through Facebook, but last year Facebook changed its algorithms, causing my posts to reach far fewer people than they used to. Instagram is not doing much for me, and the number of subscribers to this newsletter hasn’t changed in months. If you think people might like my scribblings, please share! Forward the newsletter or pass along a cartoon. If you know anything about reaching folks, please pass along your tips and tricks. Meanwhile I am working hard to connect with actual humans outside of social media, but that’s extra-tough these days.